This remarkable online video slot is the sequel to the original Ghostbusters video slot released in 2012. The sequel is still based on the 1984 action comedy featuring a group of professionals in charge of removing ghosts around New York City. The movie quickly gained cult status, and to this day people can still hum the Ghostbusters theme song, making this slot game very attractive to quite a few players. Created by IGT, Ghostbusters Triple Slime is presented across a unique 3-4-5-4-3 diamond-shaped reel set with 720 Ways to Win. Players will also be treated to a selection of bonus features including a Triple Slime Bonus Round, a Slimer Scatter Bonus, wild symbols, and scatter symbols along with a 10,000-coin jackpot prize.
Play for Real LeoVegas Casino Read Review
Pros & Cons
Gameplay Description
Payouts & wagering limits

CONS -Does not feature a conventional pay line structure.No gamble feature.Not ideal for beginners due to high betting values.

The background setting in Ghostbusters Triple Slime takes place in a dark alley located in the city of New York with rows of buildings stretching into the distance along with a road running straight down the middle. There are a couple of lights scattered around the dark alley and you’ve been called here to investigate suspicious ghost activities that were detected by the citizens of the city.The unusual reel layout is housed on the back of the famous ghostbusters ambulance vehicle with strong metal bars holding it in place above the car. The reel set received a red and black caution strip while each of the symbols have been presented in front of a grey backdrop. The animations and graphics are accompanied by a revamped version of the original ghostbusters theme song, playing loudly in the background while spinning the reels.

The video slot is rich in fantastic bonus features and if you’re a fan of the film, you are going to fall in love with not only the theme, graphics, and background music, but with the lucrative rewards that await you once the bonus features are unlocked. 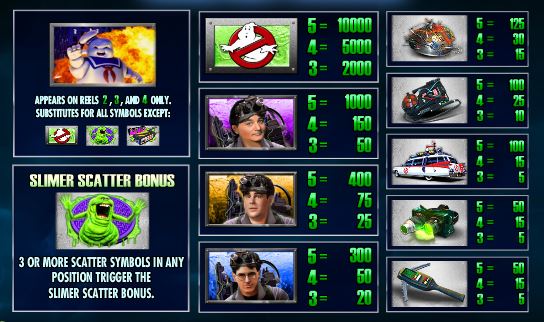 Ghostbusters Triple Slime is driven by a 3-4-5-4-3-reel format and features 720 Ways to Win. The original video slot only featured 40 pay lines, making the sequel far more rewarding when a combination is triggered on the reel layout. The sequel also comes with a bigger range of coin values ranging from a minimum of $1.00 and a maximum of $50.00. This will provide a vast betting range with a minimum bet value of $50.00 where it can be increased to a maximum of $2,500 on a single spin. Players will also be pleased to know that this low variance slot boasts with a 96.00% return to player ratio.The paytable further compliments the theme of the game with symbols taken from the original 1987 film. The symbols include the iconic Ghostbusters logo paying the highest jackpot bonus in the game, Bill Murray as Peter Venkman portrayed in front of a purple backdrop, Dan Aykroyd as Ramond Stantz portrayed in front of a yellow backdrop, and Harold Ramis as Egon Spengler portrayed in front of a blue backdrop. You will also find a variety of ghost busting equipment along with the Ghostbusters car making an appearance while you play.

64%
Ghostbusters Triple Slime is a complex and ambitious video slot with basic rules and plenty of special symbols and bonus wheels to enhance your gaming experience and hopefully reward you quite handsomely. The high betting range is aimed towards high rollers with loads of winning potential waiting around every corner.
Play for Real at LeoVegas Casino