The Phantom's Curse is there – inside your mind! And now he’s also here, in the form of a Phantom's Curse slot from NetEnt. Whether you’re into operatic musicals, phantom bullies who live in the shadows and underground dungeons or not: you’re going to love this new slot. The time-tested musical classic has been branded into a video slot by one of the best software providers in the game with all the additional perks you’d expect. In this case, the perks being a truck-load of special features and bonuses.Phantom's Curse is a 5 reel, 40 payline slot with an RTP of 96.57% and a 4,000 coin maximum win. There was already an edge of danger and intrigue to the Phantom, and now it’s been quadrupled by translating it into the video slot format. Read the full Phantom of the Opera slot review for all the details. Come on, the Phantom awaits!
Play for Real Casinoland Read Review
Pros & Cons
Gameplay Description
Payouts & wagering limits

PROS +Free spins and Re-spins both possible in the main game.The attention to detail in terms of graphics and design is absolutely amazing.Pick and Click bonus game presents great opportunities for significant wins.

CONS -Maximum win of 4,000 coins per line isn’t very high (especially when compared to other slots from NetEnt).Medium volatility slots can get boring for more experienced players.40 paylines are fixed, so player cannot adjust on how many they bet.

Play Phantom's Curse for real at these casinos

The Phantom's Curse is inspired by the massively popular musical by the living legend Andrew Lloyd Weber himself. It’s also potentially one of the most epic love-stories of all time, with the most unforgettable love triangle ever. Raul, Christine and the Phantom fighting the war of love against the setting of the theater and the opera. The ultimate dramatic context for some truly dramatic songs and plot-lines. Masked villains, candle-lit lairs, a gondola, chandelier sabotage, masquerades. Who wouldn’t like it?The musical has been on Broadway since … well, forever. The 2004 movie was a smashing hit with audiences from the around the world. So, honestly, we’re kind of surprised it took the iGaming world so long to finally get their hands on this branded bounty. The slot adopts most of what the musical is all about, including the iconic mask + rose combo that the Phantom is notorious for, Christine herself and giant chandelier. Music, background, shading all contribute towards the Phantom of the Opera we all know: mystery, darkness and a little bit of risk.

The Phantom of the Opera slot has a lot of special features in store for players. Aside from the great payouts in the main game that are enough to keep things rolling, the Phantom's Curse slot also comes with free spins and re-spins. To top all that off, it also has a Pick and Click style bonus game.Given that it’s of medium variance, it means that players can expect more consistent payouts throughout the main game and smaller wins overall. While this isn’t the best news for risk-takers and high-rollers, it is good news for those who play slots more casually. Let’s take a closer look at how each of the features operate. 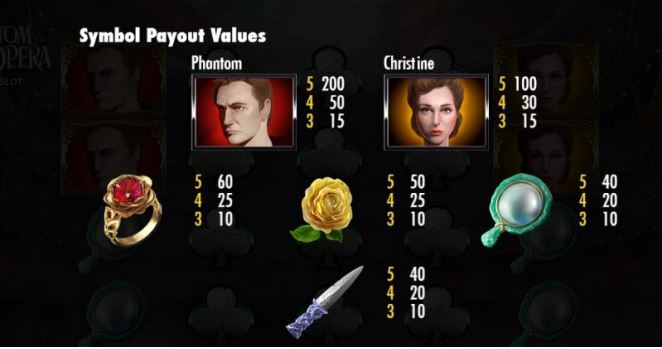 Given that this game is of medium variance, we’re not surprised that the paytable shows that the lower symbols don’t pay out much. Hell, even the high paying symbols don’t pay out that much for high paying symbols. Slots of medium volatility spend more time on the base game than on bonuses. Even though the pays are small, they’re consistent. And for players who like spinning the reels just for some relaxing fun, this is the perfect choice.The hit frequency on this slot is low at 18.95% (compared to the 30% of another NetEnt slot, Emoji Planet, for example). The RTP is average at 96.57%. So, overall, like we said – not a slot for the high-rollers or the players out to win big, fast. But definitely a good way to play off some steam.

80%
Overall, the Phantom's Curse slot isn’t exactly the best creation since sliced bread. It’s not even the best NetEnt creation in the recent months. But it’s still going to be a lot of fun for fans of the musical and players who like to keep an eye on their bankroll. We can’t fault the slot of anything really – great graphics, features and gameplay. Another stellar job from NetEnt!
Play for Real at Casinoland