Powered by Play’n GO, Super Flip is another one of those video slots which is modeled on the classic fruit slots. Play’n GO aren’t the first to come out with this concept, and they probably won’t be the last. This type of concept  can pale in comparison to other thematically rich videos lots, so it might not be for everyone. But we don’t think it’s so be underestimated.For one, the gameplay and bonuses are enough to make this one of Play’n GO’s more successful slots. And, classic isn’t synonymous with boring. We think the design has plenty to offer to make this slot more than exciting enough. Let’s take a closer look at that.
Play for Real Guts Casino Read Review
Pros & Cons
Gameplay Description
Payouts & wagering limits

+ PROSGame interface is clean, smooth and easy to use.Near Win Respin feature also available in the Respins round.Respins can be retriggered up to total of 90 respins.

CONS -Theme is not that exciting,Paytable values are pretty low, so a lot of luck with the bonus round is needed for big win.Medium level of volatility may not be enough for pro players.

As we’ve already mentioned, Super Flip is inspired by the classic fruit machines that used to be everywhere in land-casino lobbies. The theme in of itself isn’t that innovative or spectacular, but the execution is pretty attractive anyway.  The best part is, given Play’n GO’s strong background in tech and mobiles, it translates beautifully across mobile and desktop platforms alike, and on all platforms whether they’re Apple products or Android. It’s always a plus in our book when a slot is solid even on phones and tablets.The symbols of Super Flip are as follows: gem, diamond, heart, star, shamrock, Wild, ‘Super Flip’ scatter symbol, club, spade, strawberry and horseshoe. Again, very true to the classic symbols on the old slot machines. They’re an assorted bunch all with different values in terms of cashouts, which we’ll see further down below in Payouts and Wagering Limits.Even though the theme is hardly anything new, we appreciate the clean design and high-quality graphics. There might be plenty video slots themed like Super Flip around, but far less are nice to actually play. The glow tones, the fast-paced music, the smoothness of the spins – we like it all. It’s the perfect setting for some good old-fashioned spinning and winning.

While Super Flip’s theme is somewhat basic, the gameplay isn’t. The focus of this slot is entirely on the gameplay and the payouts, which is why there’s a little more to say in this department.When we realized that the point of the slot is that during the Respins round the reels flip so that reel 5 becomes reel 1 and vice-versa, we thought: ‘So what?’ But then we also realized that when you flip the reels, your chances of winning big are hugely multiplied. Why? Because you’re always more likely to get higher values on reels 4 and 5 than on the first three reels. So by flipping the reels, your odds of landing high value payouts are heightened. A lot.Let’s break down the features of the game one by one. 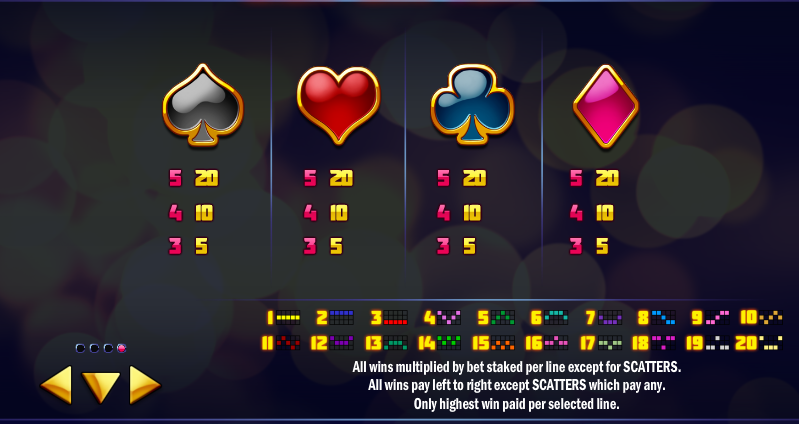 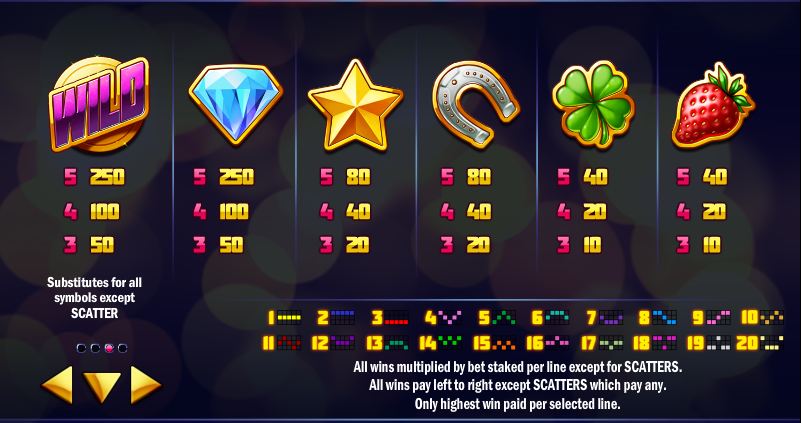 From the above images, we can immediately see that the values of the majority of the symbols isn't that high. The club, spade, heart and gem symbols only pay out 20 coins when the same symbol shows up on all five reels. The highest value symbol, of equal value to the Wild, is the diamond which cashes out 250 coins when it appears on all five reels.The coin values are as follows: 0.01, 0.02, 0.05, 0.10, 0.20, 0.25, 0.50, 1.00. Players can bet up to 5 coins per line. This means that, when you set the coin value at $1.00 and bet 5 coins per line (with 20 paylines in total) you're playing at a maximum bet level of $100 per spin.The payout of the game is set at 96%, which is a decent percentage. Even though it varies from player to player, we noticed that the Near Win Respin feature is triggered pleasantly often enough to keep things interesting.Overall, the game's payouts and special features are enough to keep things moving and exciting. However, this might still not be enough for players who are used to more complex animations and graphics, as well as gameplay.

71%
Super Flip gets a 4.0 star rating from us - it's has good graphics, clean gameplay, and good payout opportunities. There are other games from Play'n GO which are more impressive, but this is definitely one of their better slots. Worth giving it a shot!
Play for Real at Guts Casino