Lara Croft is one of the most recognizable pop culture icons of the last 20 years. From being the breakout star of the original Playstation, to being a movie star; the Tomb Raider franchise has provided Lara Croft with a place in the world's hearts.

She's also made her move into video slots with this fantastic title from Microgaming. Are you ready to go on an expedition to uncover precious treasure with the Tomb Raider? Jump on board and find out.

Tomb Raider - SotS is a 5 reel and 30 paylines video slot from Microgaming. The 30 paylines gives players plenty of opportunities to bring about winning lines. The wager range for Tomb Raider- SotS is $0.01 to $60. This gives players on a low budget plenty of chance to play the game as well as catering to players on medium to high budgets too. The maximum payout of up to 135,000 coins is a relatively healthy one when compared to the mid range maximum wager and the RTP of 96% is quite generous too.

+ PROSThe Global Adventure Bonus gives plenty of chances to win big, including the maximum payout.The scatter symbols pay out an instant win before the free spins trigger which means that it guarantees a payout.The super mode randomly awards free spins which adds a degree of excitement to the game.

CONS -The Global Adventure Bonus is difficult to trigger.The super mode doesn't give any clues as to when it will appear which can make some spins frustrating.

Play Tomb Raider 2 for real at these recommended casinos!

Tomb Raider- SotS uses its graphics to stick to the theme of the game perfectly. All of the symbols are taken directly from the original games, using action shots from within the games and sometimes the box artwork. It all looks fantastic and puts the player right in the middle of the crazy adventures that Lara Croft gets up to.The atmosphere is set perfectly by the visuals. The music ensures that the atmosphere isn't spoiled by playing a typically mysterious theme throughout the game. It all works together well to make sure the theme of the game is kept consistent throughout.The background to Tomb Raider- SotS is quite fittingly the inside of a tomb. All of the walls are etched with the various stats and standings of the game. It sticks with the Tomb Raider theme that the graphics and music created and helps to make the game stand out from the instant it is turned on.

Tomb Raider- SotS may have the famous license to back it up, but it has still stuck to the classic game mechanics for a video slot game. It includes many of the features that other video slot games have as well as a number of additional features to enhance the gameplay. 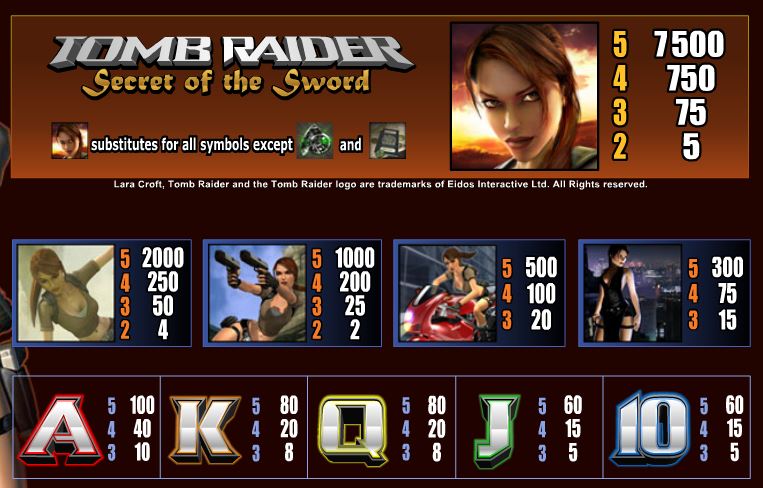 80%
Visually and aurally Tomb Raider - SotS manages to hit the kind of levels that fans of the Tomb Raider series would expect. It sticks to the theme perfectly and has a real video game feel to it. If you're a fan of the original games then this won't let you down.The gameplay for Tomb Raider - SotS is excellent. There are an excellent level of additional features, including a random trigger in the base game, that make this an engaging and enjoyable game. The only thing that lets it down slightly is the slightly low maximum wager and maximum payout, if they were increased it would be a must play slot.
Play for Real at Captain Cooks Casino