The lottery is the most popular form of gambling in Canada. With so many lottery game options available in Canada, these games are an essential part of the culture. The funny thing is that since you don’t usually find lotteries at casinos, many people do not even think of it as gambling! But whether you’re playing the country-wide lottos like Lotto 6/49, or you’re sticking to your local lotto pool, you’re always taking a chance on winning a potentially life-changing sum of money. After all, the chances of scooping up a million-dollar prize are always on the horizon, and somebody has to be a winner – why couldn’t it be you?

On this page, you’ll find all the information you need on lotteries in Canada. Think of it as your guide to everything you need to know about the world of Canadian lotteries in the page below, including which lotteries have the best odds, the payout ratios of different lottery games, and where to buy Canada lottery tickets online.

How many lotteries are there in Canada?

There are several regional lotteries in Canada, but there are only three national Canadian lotteries. These are the Lotto Max, Lotto 6/49, and the Daily Grand.

Is Powerball a Canadian lottery?

No, Powerball is an an American lottery – but Canadian players can try their hand at it too! Yes, you read that right – besides Canadian lotteries, players in Canada can also take part in (and even potentially scoop up the jackpots!) of mega-lotteries held elsewhere, such as the US-based Powerball. For more information on Powerball, click here.

Which lottery is the easiest to win in Canada?

There are many different Canadian lotteries, depending on what region you’re looking at, and each lottery has different odds.

The Daily Grand takes place across all of Canada. Players who buy a Daily Grand ticket are in with a chance to win $1,000 per day for the rest of their life! That’s the best kind of insurance we’ve ever heard of. One $3 ticket will give you a choice of 5 numbers from 1-49 and 1 Grand Number from 1-7. So far, a total of $376,520.00 has been won from Daily Grand across Canada over the period of a month.

In order to participate in the Daily Grand draw, you can either buy Quick-Picks of the Daily Grind, or choose the numbers yourself. Players can even opt for a Combination ticket, where they can combine multiple options. The company claims that this guarantees a win every time. The draws take place every Monday and Thursday, where 5 normal numbers and 1 Grand Number will be selected.

The Lotto Max lottery takes place every Friday. So go grab your Lotto Max ticket, and maybe you’ll have a little extra to spend for the weekend.

Lotto 6/49 is probably the most popular out of all the Canadian lotteries throughout the country. It holds the record for the two largest jackpot wins in CA lottery history: $64 million and $63.4 million respectively. The first happened in 2013, and the latter in 2015. First started in 1982, it was also the first lottery in Canadian history to let players choose their own numbers. A huge total of $6,915,673.50 has been won from this lotto over just the the period of a month.

Every $3 ticket gets the player 2 different sets of numbers. The first set is for the main jackpot draw, where players have to choose 6 numbers from a field of 1-49. The jackpot starts at a minimum of $5 million, and can accumulate over time.

The second set is for the $1 million draw pool. Players have a 10-digit set of numbers for the prize draw. This latter prize-draw is for a GUARANTEED win. The $1 million pool is distributed every draw in some way. Lotto 6/49 draws take place every Wednesday and Saturday.

How many Canada lottery companies are there?

Canadian lotteries are governed by different lottery corporations according to each region. As we’ve just stated, there are five different corporations in total.

The areas in which they operate are pretty self-explanatory from their names.

The different corporations control the rules and the workings of any and all Canadian lotteries in their designated area. Together, these five lottery companies make up the Interprovincial Lottery Corporation (ILC), an organization which runs Canadian lotteries across the nation. Lotto 649 and Lotto Max are administered by the ILC.

When are Canadian Lotteries drawn?

The schedule for Canadian national lottery draws is as follows:

Other regional Canadian lotteries take place on a weekly basis. Canada’s lottery regions do not sell lottery tickets outside their respective borders. Here are some of the most popular regional lotteries along with the prize money you stand to win.

No wonder Canada lotteries are so popular – there is a draw happening nearly every day of the week, and the prizes that can be won are fantastic!

How to Play Canadian Lotteries

Playing Canadian lotteries online is very similar to playing the lottery in the traditional way. Even the type of play is the same – the only difference is that you use lottery sites to buy your tickets instead of going to a lotto booth or shop.

You can even buy Quick-Picks instead of choosing your own numbers, just like at a lotto shop.

Make sure you only purchase tickets for Canadian lotteries from legit lottery sites.

Where Can I Play Canadian Lotteries Online? More and more lottery sites are opening up each and every day, so it can get confusing which ones to turn to. We’ve listed just a few of the big names out there right now. These are trusted sites, which are reliable and safe in terms of monetary transactions and legal legislation.

Canada Lottery Online: This casino offers services to Canadians living in the country and even Canadians living outside the country alike. It mostly sells tickets for international lotteries, rather than national ones. That includes Euromillions from various countries, Powerball and the UK Lotto.

Lotter: This whopper of a site has been around since 2002. It offers membership to players from all over the world. And it sells tickets for CA lotteries like Lotto 6/49 and Ontario 49, in addition to many other lotteries from many other countries.

Lottoland: Lottoland only recently opened its services to Canadian players as well. It has the whole shebang on offer – keno, scratch-cards, Mega Millions, Powerball – you name it. Except, it seems, tickets for Canadian lotteries. But as Canadian players, you can still take advantage of all the other enticing lottery games

Should I play Canadian lotteries for real money?

The world of Canadian lotteries is a vast and exciting one. With so many affordable options available, you too could be throwing in your lot with all the rest. Just like you, people who are now millionaires took a chance and won big time. It’s not guaranteed that you’ll ever become this level of rich – but, heck, it’s worth it just for the fun of it.

Want to try a game of lotto? Head on over to the sites we just mentioned above, or head out to a lotto store. Buy a ticket and wait for that magic draw! 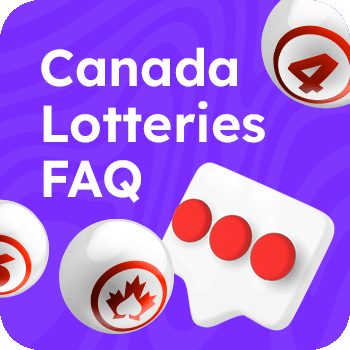 Do you have to pay taxes if you win the lottery in Canada?

No, lottery winnings are not taxed in Canada unlike in other countries. This is because of the Canada Revenue Agency windfall rules. These rules state that people do not have to declare their winnings or pay tax on them. However, the rules are somewhat different for US residents who win the lottery in Canada. American winners are advised to get in touch with a tax professional.

How old do you need to be to play the lottery in Canada?

According to Canadian laws, persons must be at least 19 years old to buy lottery tickets. This applies both online and offline.

Which lottery is the easiest to win?

Daily Grand – 1 in 13.34 million, which means that you still have to be very lucky to hit the jackpot. That said, you have a much higher chance of winning one of the ‘smaller’ prizes, which can still be in the thousands or millions of dollars.

Can a foreigner win the lottery in Canada?

Absolutely! International lottery players do not even need to pay income tax to Canadian authorities on their lottery winnings.

Can a tourist win the lottery in Canada?

Yes, a tourist who buys a lottery ticket has as much of a chance of winning as a citizen or permanent resident of Canada.

How long does it take to process my Canadian lottery winnings?

Generally between 20 minutes for a smaller win up to 3 hours or more for a major prize win.

If you win the lottery can you remain anonymous in Canada?

Rules vary from one province to another, but usually lottery winners in Canada cannot remain anonymous. Lottery corporations like to share winners’ photos and stories for publicity.

Can you gift lottery winnings in Canada?

Yes. There is no gift tax in Canada if you give winnings to a friend or family member.

How to win the lottery in Canada?

If only we knew…