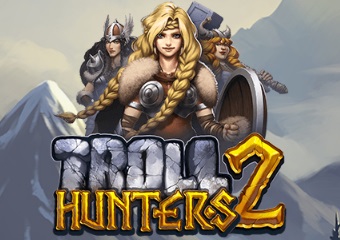 Players get to choose one from three bonus game variations

You can collect multiple wins on every spin

Troll Hunters 2 slot is available to players in Canada

There’s only one real special feature

The game doesn’t have any Scatters in play

As the game’s title suggests, this isn’t the first Troll Hunters game to grace online casinos around the world. Play’n GO released a sequel due to the positive reception of the first game. Although not drastically different, the provider definitely dialed some things up, and stripped back a couple of others. The most obvious change is the fact that Troll Hunters 2 works on 5 reels that spin to come together and make winning combinations that run on cluster pays. At the top of the scale, this High volatility slot game offer wins of up to 5,000 times your bet. Let’s find out if these troll hunters collect a bounty for a job well done.

What is the theme of Troll Hunters 2 slot?

It’s an all-female cast on this Play’n GO slot, where three fearsome women warriors are draped in crude clothing and brandish weapons reserved for battling trolls. One of the leading ladies stands to the right of the reels the entire time you’re spinning, but her entourage only make an appearance in icon form across the grid. Graphically, the designers have boosted the look since the original release, and this is particularly evident during the bonus game. The symbols are all nicely drawn, and you can pick out all three of the troll hunters easily, particularly because they’re all sporting different hair colors.

The backdrop is a dramatic, Lord of the Rings-style mountainous landscape, where you imagine the wind blows and there’s scarcely ever a soul in sight. When it comes to the actual troll (who only makes an appearance during the bonus game) the designers haven’t broken the mold too much. He’s exactly the same sort of over-sized, bald and confused looking creature we’ve seen in Harry Potter movies and the like. The soundtrack is well-matched, an epic tune that fits perfectly with the fantasy adventure theme of this game.

How to play Troll Hunters 2 slot

Although technically Troll Hunters 2 comes equipped with a few special features, one of them is more of a game mechanic. Despite the game not being exactly what you’d call a feature rich production, its solitary bonus game does offer a decent level of excitement.

The multiplier feature that’s attached to each spin is pulled in from the original, but this time it comes with a twist. The new version works with falls and stacks rather than spins. What this means is that when a win lands, it vanishes off the screen, and new icons fall down from the top to fill the empty spaces. This gives players a chance at a new win. The process repeats itself until no more wins are formed. For each consecutive win within a single spin, players are rewarded with a multiplier that rises by x1 each time.

If you succeed in landing three of the same kind of symbol, the middle symbol will turn Wild and stay fixed on the grid for the next tumble of symbols. Wilds can substitute for all standard symbols. You might have a tough time getting to experience the rather exciting bonus round, it took me a couple hundred spins to get there. The reason it’s a little tricky is because you need to uncover hidden word (‘BONUS’) that’s lurking beneath the symbols to launch the bonus game. It also moves to a new location with every new symbol drop. More likely than not, this will require multiple symbol matches within a single spin. Once you do launch the bonus game, a nice bit of player interaction kicks in. you’ll be asked to choose the amount of Free Spins in combination with Multipliers and Wilds. There are 3 options to choose from:

The Bonus Game also comes with a Win Spin Feature, which is the best chance you have at landing the massive 5,000 times your stake maximum prize. Keep your eye on is the Shield meter on the left side of the reels. Land warrior symbols in winning combinations to gradually fill the meter. When this gets filled up it will trigger the Multiplier Wilds Feature. This will randomly place one or two 2 x or 3 x multipliers on the grid. The size of the multiplier depends on which of the three bonus symbols you chose. If you fill the Shield Meter during a Win Spin then you’ll re-trigger the feature.

What is the RTP on Troll Hunters 2 slot?

Troll Hunters 2 has an RTP of 96.50%. The five reel grid plays host to nicely designed symbols that stay true to the theme. This includes three female warrior symbols that pay anything between 0.5 x and 10 x your stake if you can manage a combination of 3 to 5 symbols horizontally or vertically. Interestingly, a combination of different warriors also pays out at a range of 0.25 x up to 5 x your stake.

The standard medieval-cum-fantasy warrior paraphernalia (these are the horn, helmet, sword hammer and axe) are the low paying symbols of the game, and could pay out up to 4 times the bet at most. The most glorious of all the symbols is the Golden Wild, which can generate a very healthy win of 50 x your bet! The top payout of 5,000 x your stake is pretty standard for high volatility Play’n GO games, a prize that can only be achieved with the Win Spin feature within the Bonus Game.

Should I play Troll Hunters 2 slot?

I couldn’t help but feel that Troll Hunters 2 is a little bit style over substance. On the visual side of things, it definitely looks great, and there’s obvious talent behind the design. Unfortunately the game suffers slightly due to the amount of time required to reach the only truly exciting part of the game play. Whether or not Troll Hunters 2 is better than its predecessor is going to come down to personal preference. However the facts are that the second generation troll hunters use less bonus features, are more volatile and work with better graphics.