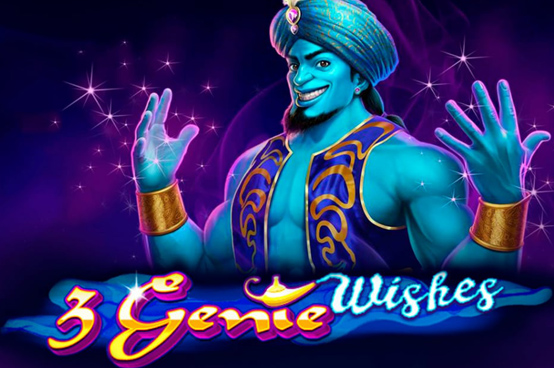 The scatter symbols pay out a small win before the features even begin.

The 2 different types of free spins offers a good amount of variety to the game.

The base game doesn’t have much to increase engagement.

The scatter symbols are often difficult to hit.

3 Genie Wishes is a video slot from Pragmatic Play that takes you right into a world of genies and magic. Offering an incredible experience that is out of this world, 3 Genie Wishes is aimed towards creating excitement and fun. Granting wishes left and right there are a variety of features and the ability to be the next Aladdin. Do you want to walk away with your wishes granted? 3 Genie Wishes gives you the chance for all of your wishes to come true, all you have to do is get lucky and rub the lamp.

3 Genie Wishes is a 5 reel and 50 payline video slot game. This is an excellent number of ways to create winning lines, while it doesn’t hit the heights of some of the 243 ways to win slots, it is still near the top when it comes to standard payline games. The wager range of $0.50 to $250 allows players on all kinds of budgets the chance to play 3 Genie Wishes. The maximum win of up to 500 times your stake isn’t as high as some other games on the market and the RTP 96.53% is slightly above average.

The images from 3 Genie Wishes instantly evoke memories of the classic Disney Aladdin movie. The symbols take on the same kind of theme as the movie and it shows through with everything that happens in the game. It makes sure that the game has a consistent and memorable theme the whole way through. This means that the atmosphere for the game sticks to the theme.

The background for 3 Genie Wishes is a shot of a Middle Eastern town. It could plausibly be the same place that Aladdin is set in, as it offers a similar visual. This makes sure that the background keeps the theme running through the game.

3 Genie Wishes sticks to the formula of video slot games that has served Pragmatic Play so well over the years. Offering wild symbols and scatter symbols, it is a familiar experience to long time players as well as offering a simple entrance into the world of video slots for new players. There are 4 bonus features included in 3 Genie Wishes. They are all triggered by managing to gain 3 scatter symbols on the reels all at once.

As soon as this occurs you are given 3 symbols to choose from which will instantly engage one of the 4 bonus features. The choice is random so the same symbol won’t give the same feature each time. The 3 scatter symbols also award an instant win of your stake before your feature begins.

The award feature is also split into 2 separate features. The first feature is the small award. This is a simple instant win that pays out whatever your stake was that triggered the feature. The high award is where things get really interesting. Also an instant win the high award pays out between 10 and 500 times your stake. This is where the maximum win for the game can be found.

The maximum wager for 3 Genie Wishes is $250. This is right near the top of the pile when it comes to maximum wagers. It should help to entice high rolling players as there aren’t many games on the market that offer a higher wager. The minimum wager for 3 Genie Wishes is $0.50. While this isn’t a huge amount it is still higher than what most other slots offer. This may put off players on very low budget, but it should still be okay for the majority of players.

The visuals for 3 Genie Wishes are all very polished and stick to the theme of the game very well. It creates a magical atmosphere that most players will enjoy. All images are easy to view and it is almost impossible to confuse any of them. This makes the game very easy to follow, especially with the 50 paylines.

The gameplay for 3 Genie Wishes is quite standard when compared to most games on the market. While the bonus features are enjoyable and engaging they don’t appear too often and the base game doesn’t have enough about it to keep players engaged for long periods of time. The low maximum payout also means that 3 Genie Wishes may put off higher rolling players despite having a high maximum wager.