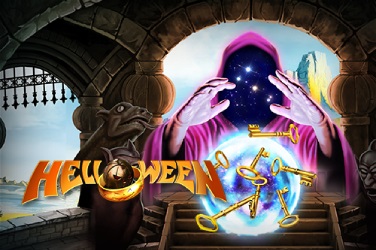 There are seven different Wilds in play

Helloween slot is available to players in Canada

Multipliers only go up to 10 x

Not all the bonus features offer the same potential

The approach of October always sees a veritable hailstorm of Halloween-themed games hit various online casinos. Play’n GO decided to get in line extra early this year, hoping to ramp up excitement on this popular holiday. But this isn’t just another pumpkin littered slot. The game is based on the musical career of a German rock band that goes by the same name. Helloween comes equipped with 5 reels, 10 paylines and the chance to score prizes up to 5,000 times the bet. You’ll get there thanks to a spinning wheel that unlocks all styles of Wilds and Free Spins. Let’s find out if this game offers less trick and more treat.

What is the theme of Helloween slot?

Helloween is a German rock band founded all the way back in 1984. And despite the fact their hey day was a few decades ago, the band still has enough of a presence to command its own slot game. The two founding members are bassist Markus Grosskopf, and guitarist Michael Weikath. But unlike most branded slot games, Play’n GO chose to place equal focus on the Halloween theme as it does the actual band references. The low paying symbols are Ace, King, Queen, Jack, Ten, and Nine. They’re the usual royals that have been given a glamorously dark metal twist. Despite the efforts of the designers, the symbols fail to wow. The game’s premium symbols are more in line with the more common Halloween theme. You’ll get a visual treat of creepy hands, various creatures, a mystic waving over a crystal ball, and a ring adorned with a grinning pumpkin face.

The symbols carry decent value, ranging from eight up to 20 times the stake for five of a kind. The remaining symbols, and here’s the really big surprise, are a collection of no less than seven different Wilds. You might have a little problem telling them apart, and this is largely because they’re all represented by different types of pumpkins. The regular, most basic, Wild is shaped as a Jack’o Lantern, and it also pays out at 20 x for five of a kind. The rather random game is tied off by a soundtrack made up of all Helloween’s hits, although no one would be surprised if you’ve never heard them before.

How to play Helloween slot

All in all there are eight different special features you can expect to unlock. This might sound chaotic but it’s all been neatly organized by Play’n GO.

Each of the seven Wilds corresponds to a different bonus game. Since Scatters also act as Wilds in this game, any matching three pumpkin Wilds will launch the Feature Wheel (see next).

You’ll need to land three Scatters on reels one, three, and five to unlock this feature. Manage this and you’ll kickstart a spinning wheel. Its task is to award one of the seven Free Spins games. Here’s what’s in store:

Last but not least is the Helloween Multiplier. You can keep an eye on this at the top of the grid while you’re busy spinning. At the end of any feature, a Multiplier of 2 x, 3 x, 5 x, or 10 x may be applied to the total win.

What is the RTP on Helloween slot?

Helloween has an RTP of 96.20%. It comes with Medium volatility, which means that you have a fairly good chance of triggering a couple different bonus rounds if you’re playing a few dozen spins.

It is a game optimized for any device and it invites players to place bets starting from C$10 and going up to C$100 per spin. The game mechanics are exciting, largely thanks to the multiple Wilds that take it in turns to trigger the feature wheel. And who doesn’t like a good wheel of fortune?

There are seven different ways to try and scoop up a portion of that 5,000 x top prize, and each feature win will be boosted by a multiplier of up to 10 x. Call me greedy but I was hoping for a little more there! The base game alone won’t take you very far, the Jack’o Lantern Wild fetches the highest prize there, with a 20 x payout for five on winning payline.

Should I play Helloween slot?

Helloween is an interesting game that walks the line between themed and branded. It’s very obvious that the choice of launching it during the spookiest month of the year was no accident, but the metal rock band interludes take away from the usual intensity. The majority of players probably haven’t heard of Helloween before, but that doesn’t matter all that much, it’s the gameplay and prize potential they’ll be looking out for. Of course, 5,000 times the stake as a top prize isn’t the biggest win on the slot block, but it’s definitely fairly generous when you consider the Medium volatility ranking. The game’s math model offers every player (regardless of their bet size) the chance to walk away with a hefty win. And if the anticipation of a giant treat doesn’t scream Halloween, then I have no idea what does.