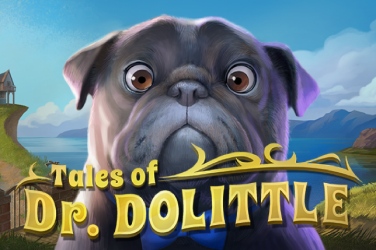 About Tales of Dr. Dolittle Slot

Take a jump into a story that has been around for almost a century. Today, we’re having a look at the Tales of Dr. Dolittle slot and try to find out if the game can bring the magic of the well-known stories to your screens. This slot will be released on April 25th.

The slot was developed by Quickspin and is played on the typical 5×3 reels with 25 paylines. The RTP is a generous 96.70% and with the low volatility, you’ll see wins very frequently, but they might be on the lower end more often than not.

We got nostalgic playing this slot and enjoyed the colorful magical world of Dr. Dolittle. Find out all about this slot in our review below and enjoy it in our recommended online casinos.

Doctor Dolittle was created by English children’s book author Hugh Lofting and the first book was published in 1920. The character started off as a nice distraction in letters Lofting wrote to his children from the trenches during World War I.

Most of you will know that Doctor John Dolittle is a doctor that rather heals animals instead of people and who has the unique ability to actually talk to his animal patients in their respective languages. The adventures of Dr. Dolittle spread 15 books between 1920 and 1952 and have entertained children all over the world ever since.

The slot tries to bring the uplifting feeling and the involved characters to the reels and manages to do so in magnificent fashion. You’ll find yourself connecting with John and his charges at once and will be transported back into the actual stories in no time.

As mentioned before, Tales of Dr. Dolittle is played on the fairly standard 5×3 reels with 25 paylines. The background shows the doctor’s practice on a hill and his airship that he uses for his travels (as if he were trying to go around the world in 80 days…but that’s another story).

All of this draws you into the story even more and you’ll be fully immersed by the time you trigger one of the bonus features, that we’ll explain below.

The wild symbol in Tales of Dr. Dolittle comes in the form of a golden ‘X’ on purple background with the golden word wild and some lamas on it for good measure.

As usual, the wild symbol will substitute for every other symbol, except the bonus symbol and to top it all off, the number of wilds that are part of a winning combination will determine the multiplier that is applied to that win. So, if you have 4 or more wilds, your win will be multiplied by x5!

This feature is probably the crown jewel of this slot. Whenever you land a winning combination, all winning symbols will be locked in their place and a respin is triggered.

If that respin reveals any additional symbols on a winning line, those are locked as well and another respin occurs. This goes on until no more winning symbols are added and only then will the win be paid out. If you get really lucky, you can fill the whole grid with one symbol and if you even throw in a couple of wilds, that win is even multiplied!

Once the bonus round is triggered, Dr. Dolittle sets off in his airship and you’ll be awarded 10 free spins. During free spins, one wild symbol will land on each spin, guaranteed!

You can spin the reels in Tales of Dr. Dolittle for as little as $0.25, but you can also crank it up to eleven and bet $100 each spin. The maximum win is quite modest at $25,000, but since the slot has a low variance, it isn’t exactly the go-to game for high rollers anyway.

The RTP clocks in at 96.70% and that makes for a very fair slot as well, seeing that the average RTP is only around 96%.

Overall, this is a slot that caters to players that just want to enjoy the game. It pays out quite frequently, albeit not very highly and it looks nice and has some exciting features that can garner higher wins.